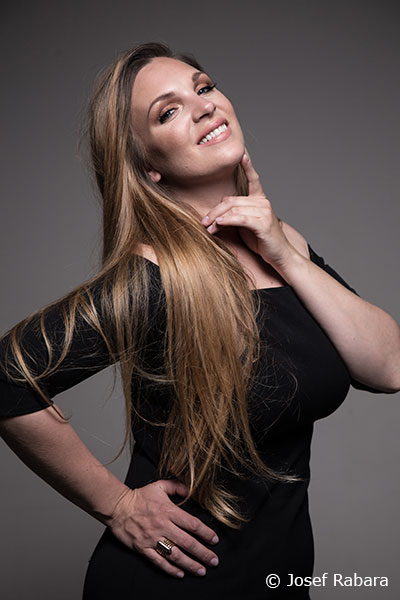 Ester Pavlů, a Czech mezzo-soprano, was born to a rock music family. However, contrary to her parents’ expectations, Ester chose the operatic journey in music to be hers. She became a laureate of several international singing competitions, such as Antonín Dvořák Singing Competition, Karlovy Vary, Czech Republic, International Competition of Belcanto Vincenzo Bellini, France. Ester also received the Beno Blachut Award followed by an invitation to the Gstaad International Music Festival in Switzerland.

In 2017, Jose Cura “discovered” her at his masterclass course. He invited her to sing with him at his Prague concert and engaged her as Fenena in Verdi’s Nabucco performed by the National Theatre in Prague.

She debuted as Laura in C. M. Weber’s The Three Pintos in the State Opera Prague. Ester also made a convincing performance as Dona Elvira in Mozart’s Don Giovanni in Estates Theatre in Prague or Foreign Princess in Dvořák’s Rusalka in JK Tyl Theatre in Pilsen, Czech Republic.

Her remarkable concert performances include the part of Old Woman in the world premiere of Bohuslav Martinů’s What Men Live By conducted by Jiří Bělohlávek. The production of this music piece also earned a nomination for the International Opera Award in 2015. The recording of Martinů’s What Men Live By was awarded the Czech Musical Award – Anděl - for the best classical recording in January 2019. From 2013 to 2017, Ester was a long-standing soloist for the festival staging of the Mystérie de Noël at the Grand Théâtre du Puy du Fou in France. In 2017, she held a Dvořák’s Biblical Songs concert conducted by Marco Guidarini in The Teatro Lirico di Cagliari, Italy.

In the autumn of 2019, Ester went on a very successful UK Mahler’s Symphony No. 3 concert tour with the FOK Prague Symphonic Orchestra conducted by Pietari Inkinen a debuted in Sofia, Bulgaria, as Cinderella in Rossini's Cenerentola. In the 2020/2021 season, she will appear as Carmen in the same-name Bizet's opera and as Queen in Weinberger's Schwanda the Bagpiper.